Physico-chemical characteristics of habitat and morphometric analysis on Barilius bendelisis of bariliine cyprinids in Torsa river of West Bengal, India: A potential area of new research

Physico-chemical characteristics of habitat and morphometric analysis on Barilius bendelisis of bariliine cyprinids in Torsa river of West Bengal, India: A potential area of new research

Genus Barilius, an interesting group of Cyprinid fish, is mostly a resident of the hill streams. The present work is an attempt to document a systematic account of morphomeristic character of a species namely Barilius bendelisis under the genus Barilius from the Torsa River flowing in the northern part of West Bengal, India along with proper illustrations and to reevaluation the general taxonomy of the Indian bariliine cyprinids in the beam of accessible information. The mean value, the physico-chemical parameters (water temperature-26oC, pH-7.4, dissolved oxygen-6.8 g/l, etc.) of the habitat was suitable to survive the species. Findings of the result suggests to go for further study to find the huge possibility that the studied species may show cryptic diversity of already reported Barilius bendelisis of this region.

Barilius bendelisis (Hamilton) is a highlands water fish of the South East Asia region which belongs to the Cyprinidae family which lives in low, clear, and chill water [1]. There is a concern that the species is extremely widespread besides endangered in of Himalayan Region Rivers [2]. Generally distributed in hilly streams and rivers of the Himalayan region in northeast India. Generally, fish show a high degree of variation among all the vertebrates and are more vulnerable to environmentally induced morphological variation [3]. The reason for morphological variation between the populations is complicated to explain [4]. Suggestions were made that these alterations can be genetically interrelated or might be linked with phenotypic plasticity in rejoinder to environmental surroundings [5].

Hamilton-Buchanan proposed the genus Barilius and documented twelve species from the Gangetic system, India [6]. McClelland proposed Opsarius based on features like broad mouth, spots on the body, anal fin elongated and lower edge of the body extra arched than the upper portion, small dorsal fin placed behind the middle part [7]. Latter on Hora pointed out that Hamilton preserved no specimens and his drawings are the source of information of various species of genus Barilius [8]. Day documented 14 species, Jayaram enlisted 16 species from India, Talwar and Jhingran documented 14 species, Menon mentioned 15 species in his study of the genus Barilius [9-12]. Day considered Hamilton’s cocsa, chedra and tila as synonyms for bendelisis and chedrio and goha as barila and bola respectively [13]. Observation of Day based on barbels was challenged by Hora who mentioned that barbels may be hidden under the folds of skin and there is a chance of unnoticed [14]. Howes in his study reported other criteria like mycological and osteological factors as a diagnostic tool for the detection of the bariliine cyprinids [15]. Chu considered the pharyngeal bones, scales, teeth in some Chinese cyprinids [16]. Nag considered caudal anatomy in his study [17]. Verma studied on the appendicular skeleton of Barilius [18]. At this point mentioned above, the review of the genus is an urgent need to clarify the ambiguities to draw attention to an accurate representation. The present study has documented Barilius bendelisis under Barilius sp. from the Northern part of West Bengal, India which has close proximity with the eastern region of the Himalayan Biodiversity hotspot. Barilius bendelisis occurs throughout India through mormhomeristic features of the species are given in addition with keys for identification.

Materials for the present investigation are the species namely Barilius bendelisis under the genus Barilius, occurring from the Torsa river (26°17'13.93"N, 89°27'33.05"E) of Cooch Behar district of West Bengal, India. Few attenuated specimens were preserved in formaldehyde solution (10%) for further studies. The instrument used for X-ray study of the Barilius bendelisis was Siemens-500 ma X-ray machine. The morphometric details of the species are given in Table 1. Which has a good agreement with the report given by Hamilton, Rahman, Jayaram, Shafi and Quaddus [19-22]. But we have observed few variations in characteristics which are very special for the studied species. Meristic characters of the majority bariliines are highly conventional and illustrate small variations, therefore observations were made, therefore, with great care to stay away from errors, to avoid specimen being referred to the incorrect species. Specimen of Barilius bendelisis (Figures 1 and 2). Was collected from Torsa River by using cast net during October 2020 (Figure 1). The colour in fresh specimens was taken before fixation and preservation. All counts and measurements i.e. lateral line scale count, anatomical measurements. Vertebral counts were done by using standard procedures [23-26]. Figure 2: Species (Barilius bendelisis) which was studied during the present study Figure 3: X-ray photograph of the species under study (Barilius bendelisis) 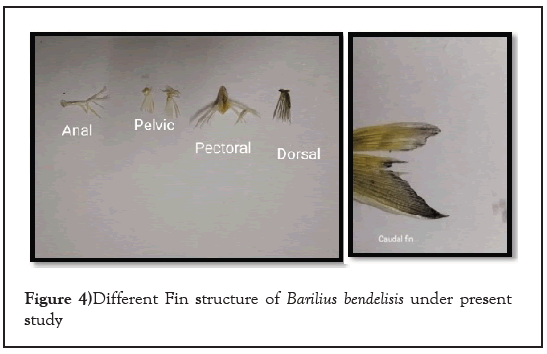 In the present study, Barilius bendelisis of the genus Barilius from the Torsa River, West Bengal, India, have been examined in detail and described from this region. The morphometric and meristic characteristics of the specimens collected have been found to be similar to a large extent when compared with already reported specimens of Barilius bendelisis. From our extensive literature survey, the diagnostic features also distinctly show that the species under report, Barilius bendelisis could be easily separated from all the already reported species and the synonymies of the Genus Barilius. But we observed a few characteristics which are not in matching with other reported Barilius bendelisis species which will open a promising area for new research in this field. Barilius bendelisis was one of the widespread species caught in the Torsa River during the month of April, May and in the month of October, November after the post-monsoon period. It is admired in the region for its taste. Our present piece of work has thrown new light on the distribution of Indian hill trout in the lower stretches unlike its restricted distribution to the upper stretches of Himalayan Rivers. However, more research is required to carry out in the field of DNA barcoding of the species, habitat preference, feeding habit, and reproductive behavior of the species so that any variability of the reported species shows cryptic diversity of Barilius bendelisis in this region could be further observed.